Since 1st January 2019, A.S.B.L. Indah has joined a new program in southeastern Madagacar, the fifth largest island in the world. Despite its mythical landscapes, the situation in which its people live is such that 92% of the population lives below the poverty line.

This is why we have taken the decision to work alongside with our local partner, le Foyer de Tanjomoha. Located in Vohipeno, about 700 km from the capital, on the southeastern coast (known to be the poorest region in the country), our partner has taken root in a region that is hit regularly by tropical storms and cyclones.

Founded in 1986, the Foyer welcomes young orphans, youths from villages who are considered to be outcasts, as well as sick and disabled people. It also is actively involved in local development (rebuilding after storms, reforestation, etc.). In addition, the Foyer de Tanjomoha supports the development of communities, such as Ambolosy. It is WITH and FOR the latter that Indah has taken a decision to act. 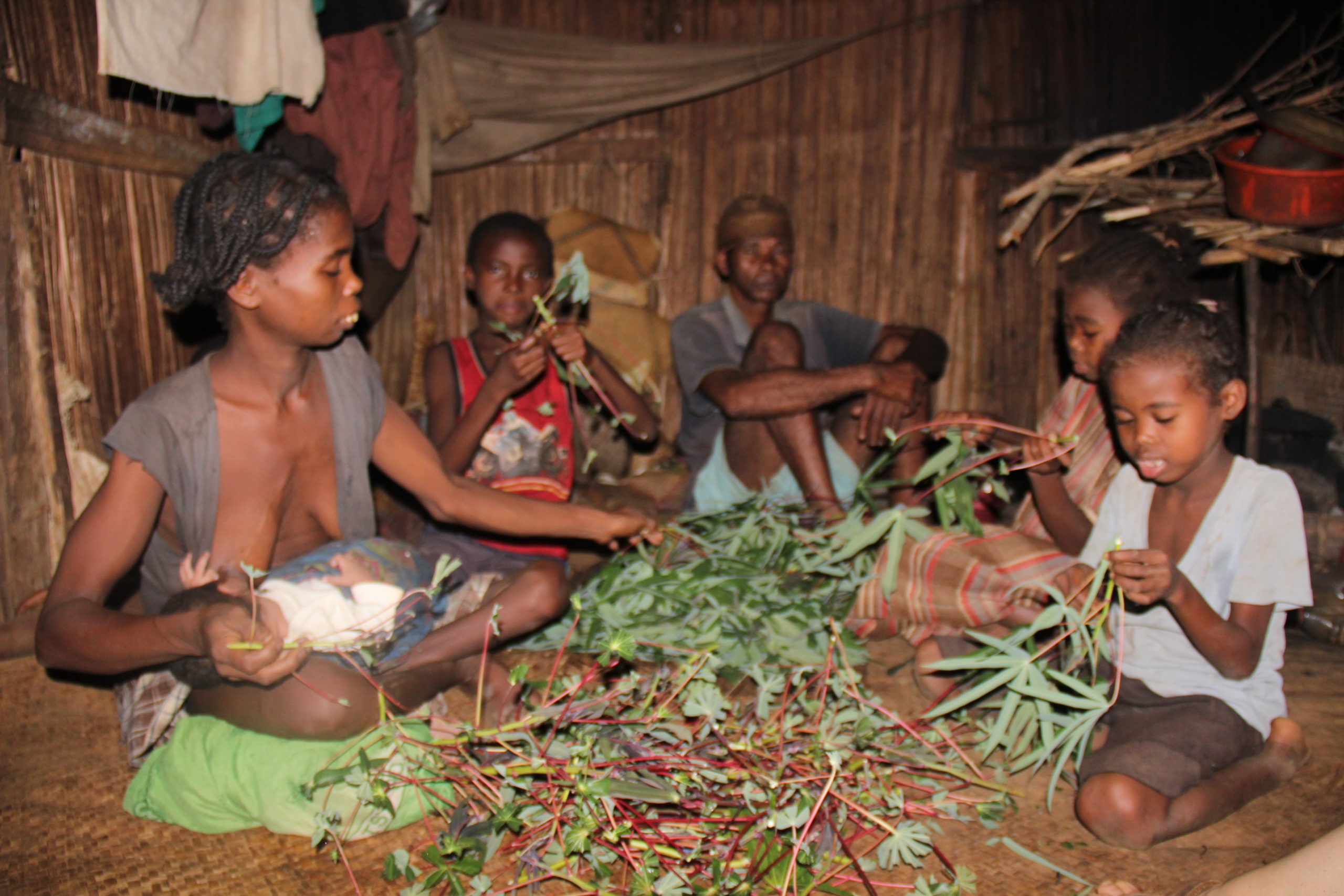 A family gathered around cassava leaves to prepare the evening soup

The project was set up in 2006 following an assessment : several bush families in Ambolosy live in extremely precarious conditions. A total of 27 families have been identified. Driven off their land after devastating cyclones, they end up on the outer edges of Vohipeno, with no land or rice fields. They then tried to survive by making charcoal, which destroyed the primary forest. Today, it often single mothers, who are either ill or severely handicapped who raise their children there. Illiterate, for the most part, they try to survive on cassava (roots and leaves) during the long lean seasons (twice 3 months a year, without a rice harvest).

In order to act in a sustainable manner to help this community to regain its dignity, we have defined some concrete actions.

WHAT ARE WE DOING ?

Prior to Inda’s partnership, the Foyer de Tanjomoha had already built a canteen to receive the children. The number of children is greater and continues to increase. Eventually, we would

like to support all the children of the 27 Ambolosy families as well as the new families to come.

Today, the canteen welcomes about 85 children who receive two meals daily, five days a week. In the morning, a mixture of cornflour and soy ; at midday, a mixture of rice with eggs, pasta, beans, vegetables or meat. Meals always come with rice water. From their homes, the children walk between 5-45 minutes to get to the canteen. 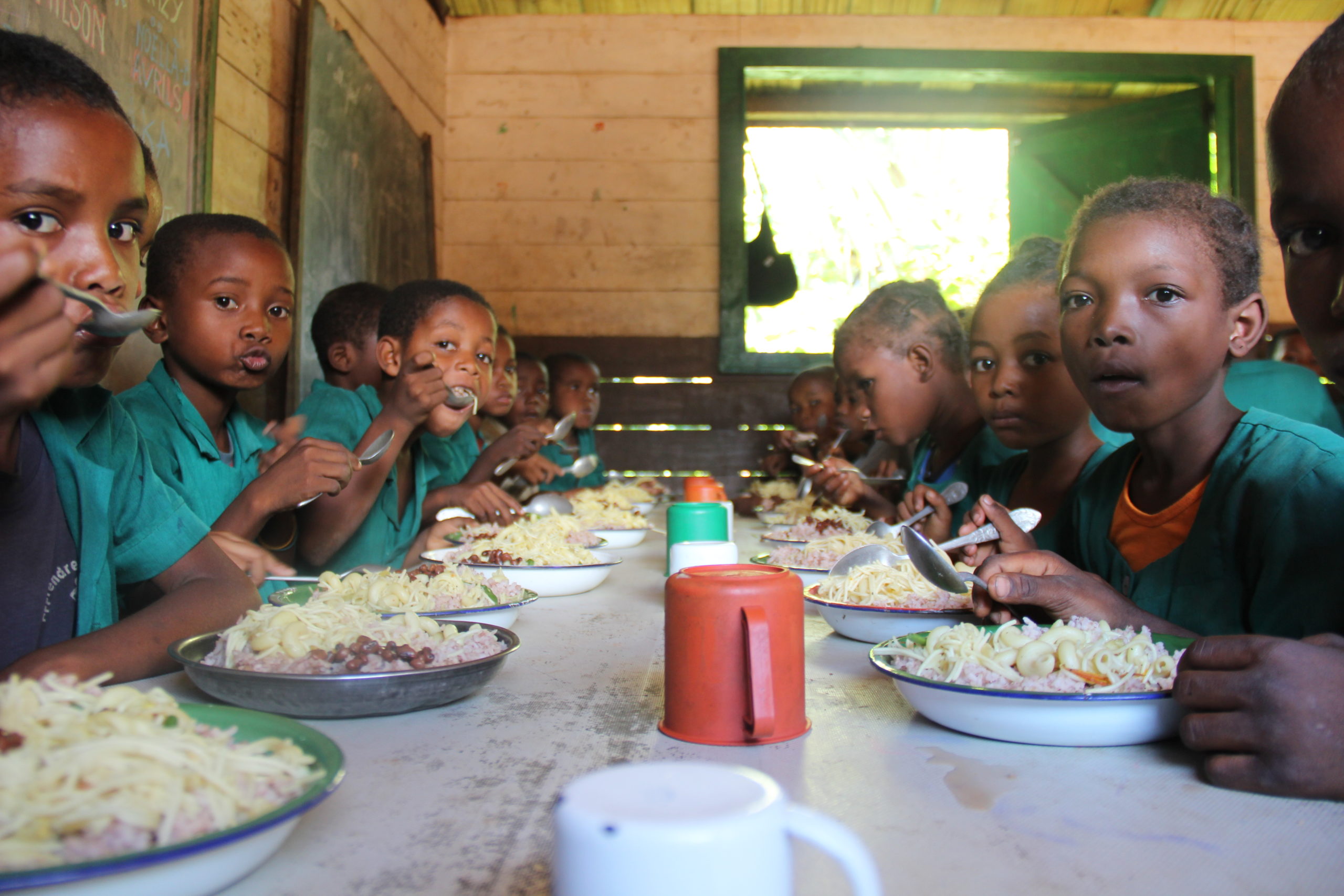 Formerly schooled in the public education system , the Ambolosy children now attend the small private school in Fanantenana, which means ‘hope’ in Malagasy. This spares them from the numerous strikes in the public education system due to the country’s political instability (unpaid teachers, absent teachers, closed classes) and thus ensures them a quality education every day. The walk between the school and the canteen is approximately 25 minutes.

On the way to school in Fanantenana, 3 children from Ambolosy in uniform

Indah attaches a great importance to its field missions. We go into the field at least once a year. Beyond the organisation and communication with our local partner, it is important for the Indah team to build a relationship with the beneficiaries. This is a basic principle which allows them to move forward confidently, and allows us to move forward with knowledge of the realities on the ground to collaborate effectively.